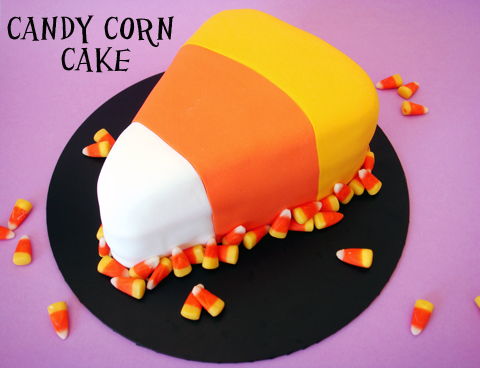 Its October again, how exciting!! A few reasons October is so rad, well there's boyfriend's birthday, my birthday, the awesome spring weather, flowers out the wazoo and its almost Halloween!! 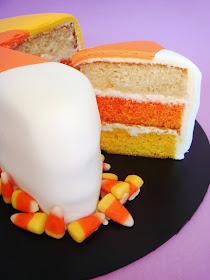 This cake is a two birds with one stone kinda deal. It fits with this months Halloween theme, but was actually for boyfriend for his Birthday. Boyfriend is a big fan of candy corn, only true fans can eat candy corn to the point of feeling ill and still go back for more. So between his candy corn crush and October being the only real time we can get candy corn in Australia it was the perfect idea for a birthday cake. 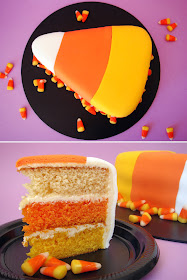 I'm not sure what the actual flavour of candy corn is, to me its a bit buttery a bit caramelly so that's the flavour I went with for the cake. I used my favourite vanilla cake recipe and teamed it with some super sweet caramel buttercream.

This cake is candy corn inside and out. It is shaped and decorated like a giant candy corn outside and the layers of cake inside also match the candy's colours. I really love how the inside of the cake turned out and the best part, it was super yummy. 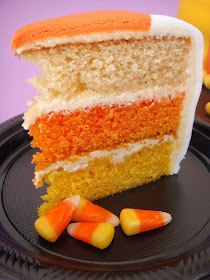 To make the Candy Corn Cake-
Trace a candy corn triangle shape on a piece of paper making sure its not bigger than your cakes, cut out and use as a cutting template.

Trim the raised tops off the cake to get nice flat layers. Using your prepared template cut each layer of cake to shape. I saved the off-cuts for another project, but feel free to eat them. 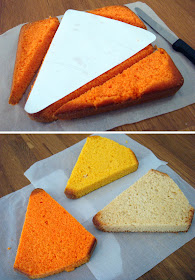 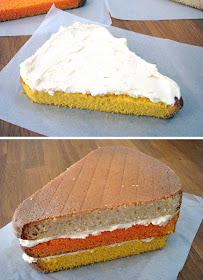 Now that you have the coloured layers assembled cover the entire cake with a layer of buttercream and smooth out. Transfer the cake to a board or plate. 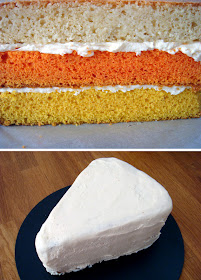 1 kg of ready made fondant roughly into thirds, colour one third yellow, one third orange and leave the last third white. Wrap the fondant with cling wrap when you are not using it to avoid it drying out.

Begin with the white fondant. Lightly dust your surface with icing sugar and roll the fondant out to about 1/4 inch thick. Cut a straight line down one side of your rolled fondant, this is where the colours will match up.

Drape the white fondant over the front of the cake about a third of the way up, smooth the top and then the sides. Try to keep the line roughly straight across the top and sides of the cake. Trim the excess fondant from the base. 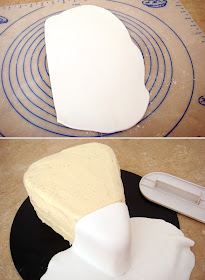 Next step, the orange fondant. Roll the fondant to 1/4 inch thick and cut a straight line down 2 parallel sides.

Brush the straight edge of the white fondant with a small amount of  water.

Lay the orange fondant over the middle of the cake lining it up against the white fondant, smooth out the top and then the sides. While you are smoothing out the fondant, gently use your smoother to push together any gaps between the fondant colours. Trim of the excess fondant around the base. 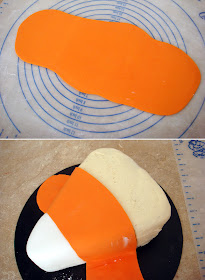 Repeat again with the yellow fondant.

Smooth over the entire cake and neatly trim around the base. 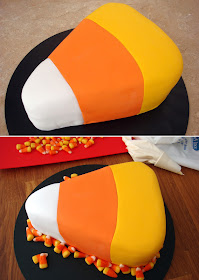 Last of all attach candy corns randomly around the base of the cake with a little piped on excess buttercream.

There you have it a really cute Candy Corn Cake!!

In a medium bowl combine the remaining 1/3 cup of milk, egg whites, vanilla extract and paste and set aside.

Sift the flour, baking powder, sugar and salt into the bowl of an electric mixer. Add the softened butter and the 3/4 cup of milk and mix on low to prevent flour going everywhere. When the ingredients come together increase speed to medium and mix until smooth, about a minute and a half.

Add the egg and milk mixture one third at a time, beating on medium for about 20 seconds between each addition. The mixture should be smooth and fluffy.

Divide the cake mix between three prepared pans and smooth over the tops.

Place the cakes in the oven and bake for 30 to 35 minutes keeping an eye on them toward the end to make sure they don't over cook. Test the middle of the cake with a metal skewer, if it comes out clean the cake is ready.

Allow cakes to cool in pans for about 10 minutes before turning out onto wire racks to cool completely. Cool top side up. While the cakes are cooling prepare the frosting.