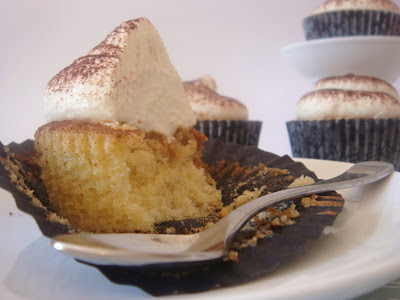 I wasn't really into tiramisu until a few years ago, about the same time I really stared enjoying coffee. Regular tiramisu is yummy but this cupcake version is tasty with an added bonus, they're portable. 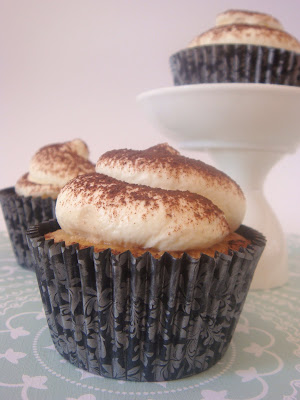 These were made as a thank you (I'll show you what for in a little while). When the person they were intended for mentioned he really liked tiramisu I immediately thought of this recipe in Martha Stewart's cupcakes. The recipe is a little more involved than your usual cupcake recipe, but believe me it is well worth it.

The little cakes turned out beautifully, the extra eggs in the recipe allowed the cupcakes to soak up the all the yummy coffee liqueur syrup without getting soggy. The mascarpone cream icing is light and heavenly making these cakes the perfect little packages. 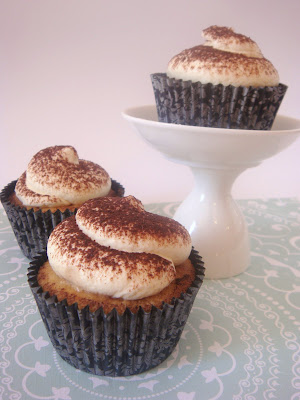 This recipe is directly from Martha Stewart Cupcakes, anything I did differently I've added in brackets.

To make the cupcakes- Preheat oven to 325 degrees. Line standard muffin tins with paper liners. Sift together cake flour, baking powder, and salt. Heat milk and vanilla-bean pod and seeds in a small saucepan over medium heat just until bubbles appear around the edge. Remove from heat. Whisk in butter until melted, and let stand 15 minutes. Strain milk mixture through a fine sieve into a bowl, and discard vanilla-bean pod.

With an electric mixer on medium speed, whisk together whole eggs, yolks, and sugar. Set mixing bowl over a pan of simmering water, and whisk by hand until sugar is dissolved and mixture is warm, about 6 minutes. 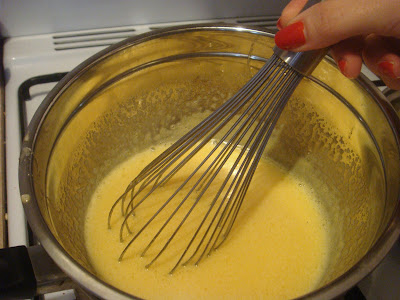 Remove bowl from heat. With an electric mixer on high speed, whisk until mixture is fluffy, pale yellow, and thick enough to hold a ribbon on the surface for several seconds when whisk is lifted. 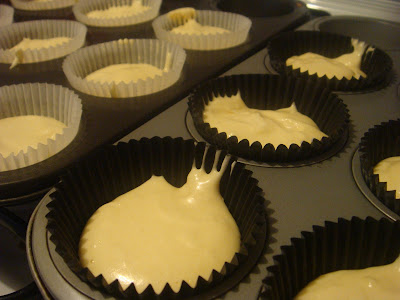 (While the cupcakes are baking and cooling, prepare the Coffee Syrup and allow to cool)

To finish, brush tops of cupcakes evenly with coffee-marsala syrup; repeat until all syrup has been used. Allow cupcakes to absorb liquid 30 minutes. (I found the cupcakes absorbed the syrup more evenly when I poked a few holes in the middles with a skewer. The holes also prevented the syrup spilling to the edges of the cupcakes and making the wrappers come off) 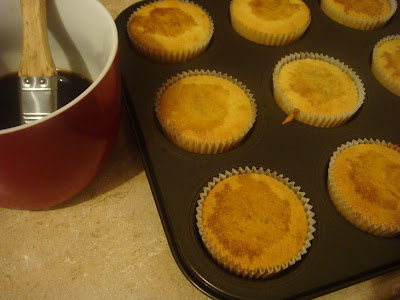 (While the cupcakes are absorbing the syrup prepare the icing)

Dollop frosting onto cupcakes; refrigerate up to overnight in airtight containers. Dust generously with cocoa powder just before serving. (I used a large round piping tip to ice the cupcakes with a swirl of mascarpone cream) 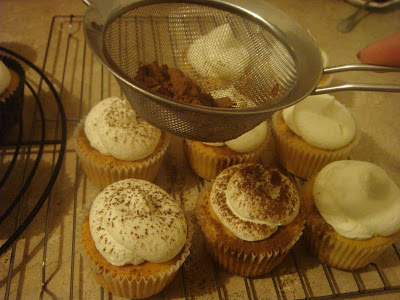 To make the syrup- Stir together coffee, marsala, and sugar until sugar is dissolved. Let cool.


For the Mascarpone Frosting

To make the icing- With an electric mixer on medium speed, whisk heavy cream until stiff peaks form (be careful not to overbeat, or cream will be grainy). In another bowl, whisk together mascarpone and confectioners' sugar until smooth. Gently fold whipped cream into mascarpone mixture until completely incorporated. Use immediately. 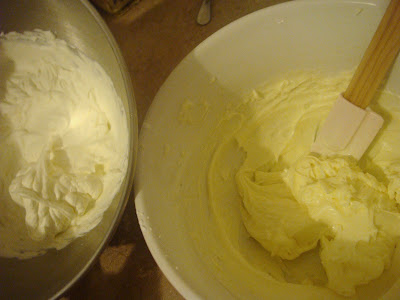 I suggest enjoying one of these with a hot cup of coffee :) 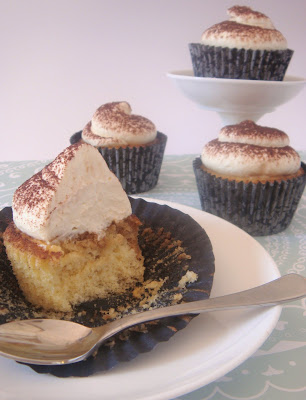 Posted by Butter Hearts Sugar at 6:00 AM