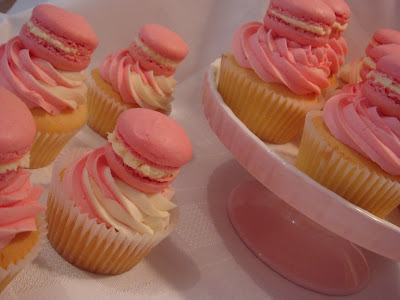 I have a naughty naughty secret about these cupcakes. I cheated and used a packet mix for the cake. Oh and it gets worse, for vanilla cupcakes I enjoy, maybe even prefer a cake mix. There I said it.

I don't know if I was being punished for using a cake mix or if it was because of the time i tried to beat rock hard butter, but halfway through making these cupcakes my electric beater decided to call it quits. It made a horrible clunking noise and that was the end.

Oh well i figure I'm now one step closer to a KitchenAid mixer and with a borrowed beater i finished off the cupcakes.

Aside from that one little mishap everything else worked out super well, the macarons were my best yet and looked very pretty with the matching swirl icing. 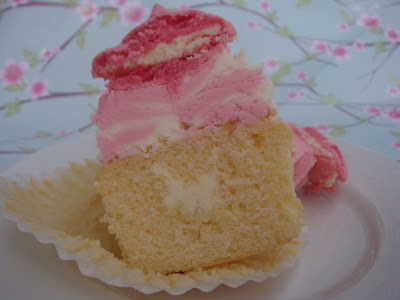 For the Whipped White Chocolate Ganache (cupcake and macaron filling)

To make the ganache- Place chopped chocolate in a heat proof bowl.
In a small saucepan bring the cream to the boil.
Pour boiling cream over chocolate.
Gently whisk the chocolate and cream until smooth and silky.
Place the ganache in the fridge until it is cool.
With an electric beater, beat the chilled ganache on medium until soft peaks form.
Divide in two, half to fill the cupcakes and half for the macarons.

For the Vanilla Buttercream

Spoon half of the buttercream into a second bowl and tint with a few drops of food colouring until the desired colour is reached.

Fit a piping bag with a large star shaped tip. Spoon the pink icing into one side of the piping bag and fill the remaining half with the white icing.

To make the cupcakes- Preheat oven to 180 degrees c. Line your cupcake pan with cupcake papers. (mine made 14 cakes)

Prepare cake mix as per instructions.

Divide the cake mix evenly between cupcake liners. (I like to use an icecream scoop for this)

Bake the cupcakes for about 15-20 minutes until lighty golden and bounce back when poked.

Cool completely on a wire rack.

Carefully cut a cone shape out of the top of each cupcake, set aside the cutout piece.

Spoon or pipe the ganache filling into the cupcakes.

Cover the filling with the saved cake cutouts. 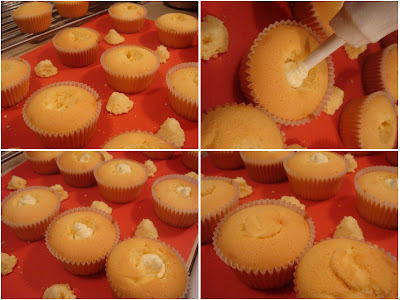 Pipe a swirl of icing onto each of the filled cupcakes. 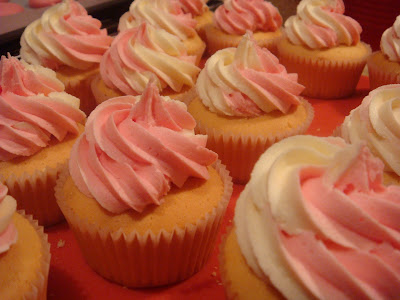 Gently press a macaron on top of the buttercream. 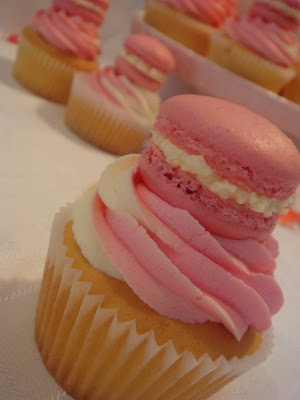 Posted by Butter Hearts Sugar at 6:31 AM