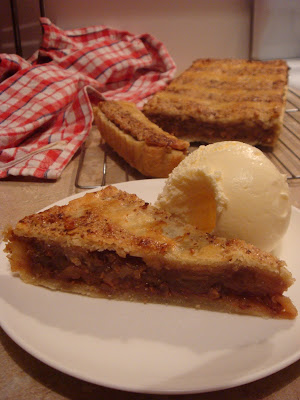 After last week’s pear and almond tart I had a bunch of leftover pears that finally ripened. I spent a whole bunch of time flicking through my recipe books looking for a way to use them up. I found a recipe in Homestyle Pies and Tarts for pear and pecan pie. It was the first time i had made anything from this book so I was keen to try it out.

I have to say I like but don’t love this pie. It’s pretty tasty warmed up with icecream but doesn’t compare to the caramel apple pie i made a little while back. I think maybe it’s the pastry that let it down. For the time it took to make it I was a little disappointed it wasn’t soft and flaky as I expected. It was the first time I’d used vegetable shortening in a dough, so maybe I did something wrong.

Overall it was a pretty nice pie.

Pear and pecan pie
(Adapted from Homestyle Pies and Tarts)

To make the pastry- sift the flour and salt into a large bowl. Add the butter and shortening and rub ingredients together until it resembles breadcrumbs. 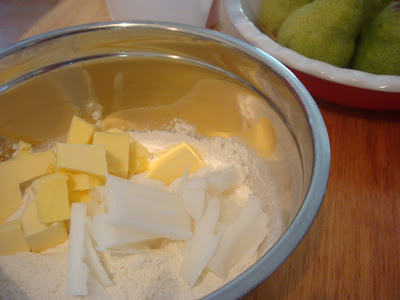 Stir in the sugar and make a well in the centre. Pour in most of the water and using a flat bladed knife mix until the dough starts clumping together. 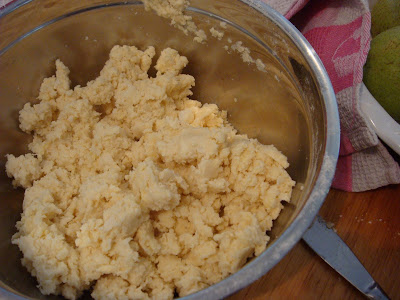 Turn the dough out onto a lightly floured surface and form into a ball.
Press the dough down to form a disk wrap in cling wrap and refrigerate for 20 minutes. (While the dough chills make the filling)

Grease a 7 inch pie dish (I decided to try out my rectangular tart pan instead). Roll out two-thirds of the chilled dough between 2 sheets of baking paper. When the pastry is the right size and shape, line the pie dish and trim the edges.

Roll out the remaining pastry big enough to make the pie lid. Cover both the lid and base with cling wrap and chill for a further 20 mins.

To make the filling- gently melt together butter and golden syrup in a saucepan over medium heat. 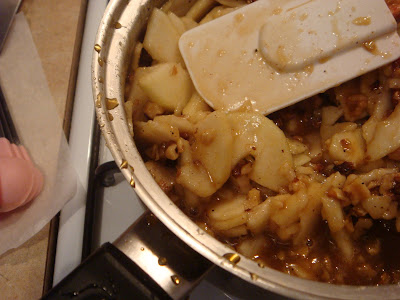 Add the pears and half the chopped pecans and cook until pears are tender. Let mixture cool completely.

To assemble the pie- preheat oven to 200 degrees c. 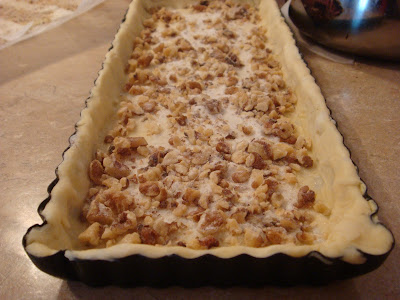 Remove pie base and lid from the fridge. Combine the remaining pecans and caster sugar, scatter over the base before spooning in the filling. 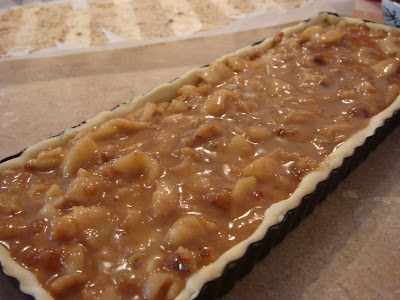 Position the pie lid over the base, pinching the edges to seal. Trim away any excess. 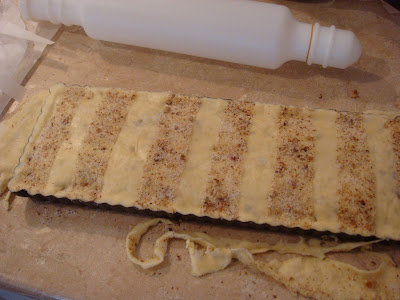 Brush the pie lid with the beaten egg. Sprinkle with the ground pecans and sugar.

Bake pie on the middle oven rack for 20 minutes. Cover the pie with foil and reduce oven temp to 180 degrees c and bake for a further 20 mins. Remove from oven and let cool in tin. Serve warm or cold.
Posted by Butter Hearts Sugar at 6:21 AM